Medals for Notts athletes at the European Masters Outdoor Championships 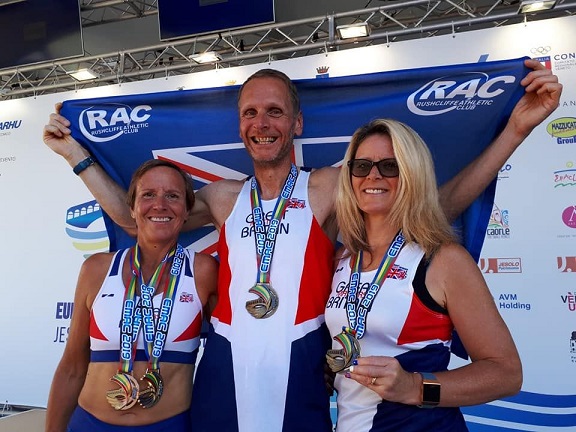 Jane Pidgeon and Wendy Kane (Notts AC) and Graham Moffatt (Rushcliffe AC) have been busy winning medals at the European Masters Outdoor Championships in Jesolo, Italy.  Jane started her European campaign with the 4k cross country - finishing as third British W55 athlete which bought her a gold team medal.  Her main event - 2000m steeplechase - was run on a very hot Thursday afternoon.  That did not perturb her and she finished second behind her close rival and only a few seconds off her recent British record time.  The 4 x 400m relay was the last event on the final day and Jane's talent was required for the W45 team, this team bringing her a bronze medal.

Wendy - whose race walking has taken off in the last few years - competed in her first international.  Her first race - 5000m was held early in the Championships.  She finished 5th which she was delighted with.  Five days later, the 10k road race was Wendy's next challenge.  Unfortunately, the course had not been set up properly and was 600m short.  However, she still battled on and finished 10th in her age group and the first Britain in the age group.  This helped the team gain a bronze medal - which Wendy was absolutely delighted with, together with what would have a been a significant pb!!

Graham had watched Jane and Wendy gain their medals and decided he wanted some of the same.  His cross country was a great race and the team just missed out on the medals.  So when it came to the 3000m steeplechase, not long after Jane's race - he was determined and focused on getting some bling.  A nail biting race saw Graham take on the lead at the start of the race, he then moved into fifth position, but as the race progressed and athletes started to tire - Graham's hurdling technique was starting to show and he could see that a medal was a possibility.  With 150m to go, Graham knew that a bronze was his, passing an athlete over the water jump and one barrier to contend, he found some speed from deep within.  Bronze was Graham's and the delight showed upon his face.  He was ecstatic!  Just because Graham is mad as a hatter - he decided he had not completed sufficient events so also took on the 5000m, 10k and the Treviso park run.  The man is a legend!!!